Priorities for nature and climate in the 2021 local government elections 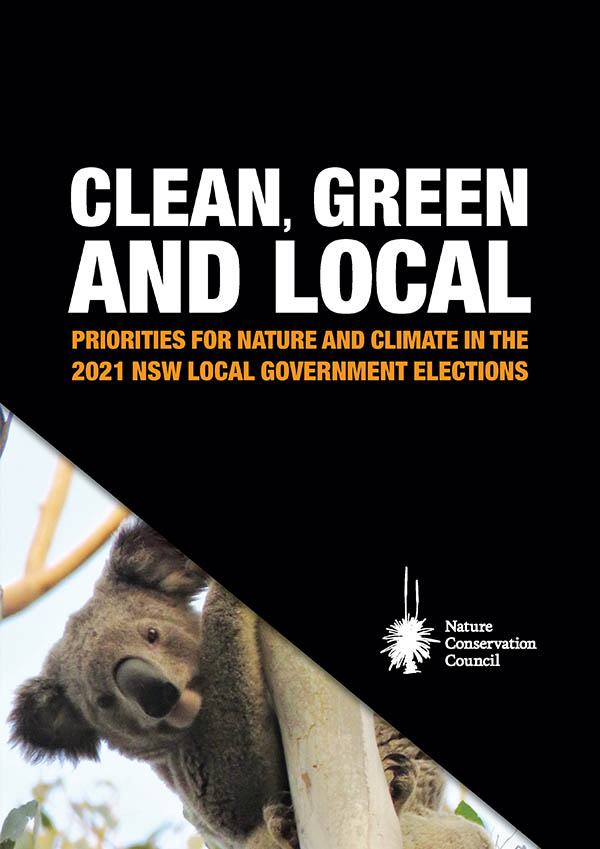 Encourage use of native plants

Set a target of net-zero emissions for all council operations by 2025 by:

Restore our rivers and waterways

[2] If a project is considered critical infrastructure, apply best-practice approaches to offsetting. First, try to avoid impacts entirely. Second, if impacts are unavoidable, minimise them by modifying the proposal. Third, as a last resort, offset the impacts by restoring and permanently protecting similar habitat nearby.

Koalas need human champions to campaign and lobby for their survival. They need community groups around NSW to organise to protect koala habitat.

We can connect you with other koala champions and groups in your area, or help you start a group.

People have rallied across the state today, calling on the NSW Government to strengthen protections for koalas and their habitat.

More than 500 people gathered in Hyde Park, Sydney, and were addressed by a range of speakers, including:

Mr Gambian said: “Koalas in NSW are on death row. Business as usual is simply no longer an option – this is an emergency that requires drastic action. Their numbers were plummeting before the Black Summer bushfires killed thousands of koalas and incinerated millions of hectares of forest. We need a step-change in our conservation efforts or koalas will join the Tasmanian Tiger as an emblem of our failure as ecological stewards.

“Any credible strategy for the species’ long-term future must include a strict ban on the destruction of koala forests and significant investment in new nature reserves, habitat restoration and ecological research. This issue is above politics – it is now time all parties worked together to implement the solutions we need.”

Doro Babeck from Bob Brown Foundation said: “We must do all to protect this iconic species from extinction. The world is looking at us and what we do to protect them. We must stop logging their habitat, whether it is on private land or public. If we can’t even stop koalas from becoming extinct, what hope do we have?

“People love koalas all over the world, yet, here, we have a government that sits on its hands and does nothing to protect them. Koalas are dying the death of a thousand cuts, as development after development gets approved and each time we say ‘oh, it’s just a few hectares lost here and there, it won’t affect the koala population overall’. But it does affect the koala population as we need to look at their cumulative effect.”

Muruwari and Budjiti man Bruce Shillingsworth said: “Koala’s are First Nations totems that need to be protected. Our totem’s die, we die.”

Alea Babeck, SS4C youth activist: “This has become the most urgent issue. Land clearing and logging are huge contributors to the climate emergency we are facing. We need our forests as vital carbon sinks and as habitat for our wildlife, like koalas. We are logging more forests than any other developed country. We should be doing all we can to protect the remaining wild places, not cut them down for woodchips. We can’t afford to do this anymore.”

The Nature Conservation Council in March launched its Koalas Need Trees campaign, which is underpinned by a policy agenda that includes:

Koala populations in NSW have plummeted in the past 30 years - estimated to be fewer than 20,000 before the Black Summer Bushfires that destroyed almost 25% of koala habitat on public land.

In late 2020, the National Party threatened to “blow up” the Coalition if the SEPP was not scrapped. The Nationals objected to the policy controlling logging on private land (private native forestry) and land clearing for farming and property development.

To end the war, the Coalition partners agreed to:

Conservation groups and environmental lawyers have grave concerns the new codes will weaken rather than strengthen protections.

The process for developing those new codes, a new Koala Strategy, and the timing for the release of both, have still not been made public.

Conservation movement ready to work with the new Labor leadership on koalas, climate, water and forestry

“We welcome Chris Minns’ election as leader of NSW Labor and look forward to working with the new Labor leadership team to put climate action and the protection of nature at the top of the political agenda.

“The people want an effective Opposition with a comprehensive set of policies to tackle our most urgent environmental issues and force the government to compete for votes in these vital areas of public policy.

“We hope that the new Labor leadership team can start a race to the top against the Coalition in the critical areas of koala conservation, climate action and the reform of water and forestry management.

“Labor has an opportunity and a responsibility to come up with a plan to end native forest logging in a way that supports workers into a sustainable plantation-based industry.

“And Labor must take up the fight on land clearing, especially terrible proposals that would accelerate the extinction crisis for koalas.

“The Coalition government is taking strong action on the energy transition and national parks, but is getting wrong on water, koalas, logging and land clearing.

“The new leader must lead on climate action policies that go beyond a just energy sector transition and includes electric vehicles and agriculture. And end the false choice between jobs and a livable climate.

“Labor must recommit to supporting a healthy Murray-Darling Basin through better water management and flow targets.

“It must also show leadership on the pressing issue of native forest logging. Our forests and the wildlife they support are dying because of unsustainable logging.”

What: Koala Day of Action, June 5. The campaign to save the koala from extinction continues with a rally in Hyde Park and other locations this Saturday calling on the government to strengthen legal protections for the species.

Where: Hyde Park (near the Archibald Fountain), Sydney

OTHER EVENTS IN NSW – SATURDAY JUNE 5

“This is a step forward for koala conservation on the North Coast, although they do have limitations and the government took more than five years to approve them,” Nature Conservation Council Chief Executive Chris Gambian said.

“These plans cover less than a quarter of the Tweed and Byron local government areas by focussing primarily on the coastal strip.

“That makes sense because these areas face the most intense development pressure, but it means significant koala habitat in the hinterland still lacks the protection.

“Koalas in NSW are on track for extinction by 2050 so further delays are literally a matter of life and death for this iconic species.

“There are also several Koala Plans of Management that other councils have lodged, including Clarence Valley and Coffs Harbour, that have sat on the government’s desk for many months, sometimes years.

“These need to be approved as a matter of urgency.”

Stokes and Liberals cave to Nationals pressure on koalas

The deal struck between the Liberals and the Nationals to minimise koala protections in rural areas will push the species to the brink.

“These are where most of the koalas live and where most koala habitat destruction is happening right now.

“If you remove protections from these areas, you have basically given up on the species and signed its death warrant.”

Recent research shows that logging and land-clearing on forestry and agricultural land accounts for 90% of all koala habitat destruction. [1]

The new deal between the Liberals and the Nationals puts rural and forestry lands out of reach of the koala SEPP.

“This policy makes a mockery of the government's claim it plans to double koala numbers by 2050. This policy will only serve to speed up koala extinction.

“This is a backroom deal, where once again koalas are the big losers.

“But the people of NSW will not cop the loss of koalas and destruction of koala habitat. We will fight this measure all the way to polling day if need be.”

The NSW Government’s response [1] to the 42 recommendations of the NSW Parliament’s koala inquiry [2] is woefully inadequate, according to the Nature Conservation Council of NSW.

“There is nothing new in the government’s response, which just rehashes policies that have already patently failed to deliver the protection our koalas need.

“Basically the government response says ‘relax, we’ve got it covered – no need to do more’.

“But koalas are more at risk now than they were late last year because the National Party has torn down the koala SEPP and the obliteration of koala habitat continues.

“Any response that does not stop the destruction of koala habitat for agriculture, logging and urban development falls catastrophically short of what’s required.

“Several studies have warned that koalas will be extinct by 2050 without urgent action - we have a duty to ensure that does not happen.”

An adequate response would include:

[2] Report of the Legislative Council committee on Koala populations and habitat in New South Wales.

25m clearing code must protect koalas and other threatened species

The code to operationalise the government’s new 25m land clearing law must protect threatened species habitat and be based on science and expert opinion, not political spin.

“The 25m clearing law the government pushed through parliament last month was a reckless piece of legislation that does nothing to protect against bushfires but does pose a significant risk for endangered species,” Nature Conservation Council Chief Executive Chris Gambian said.

“Neither the NSW Bushfire Inquiry nor the Royal Commission recommend land clearing on property boundaries as a valid response to the Black Summer fires, but politicians in the government thought they knew better.

“Now we are stuck with a bad law that could do tremendous harm to the environment.

“The codes are our last chance to get the balance right. The codes will guide how the law is implemented and can be drafted to ensure threatened species and their habitat are protected.”

It is believed the government may introduce its Rural Boundary Clearing Code before the end of the year.

The Nature Conservation Council has written to key ministers detailing minimum environmental standards the code must meet. The code must:

“The code will mean the difference between survival and extinction for koalas and other threatened species in some parts of the state, so it is vital that the government gets this right,” Nature Conservation Council Chief Executive Chris Gambian said.

Cusack saves the day, but koalas still at risk

“Congratulations and thank you to Liberal MLC ⁦⁦Catherine Cusack for risking so much to protect koalas and push back against the the National Party’s radical land-clearing agenda,”  said Nature Conservation Council Chief Executive Chris Gambian. [1]

“Ms Cusack’s principled stand displayed rare integrity and courage and has come at some personal cost.

“It is far better to go back to the drawing board on koala laws than to accept the Nationals’ koala-killing bill.

“But already the decision to revert to the old koala planning arrangements shows that the battle to protect NSW koalas is far from over.

“The furore over the new planning policy is an ideological obsession and not grounded in an actual problem.

“Weakening koala protections is at odds with the government’s stated aim of doubling koala numbers by 2050.

“This is a significant setback for koala conservation, but it is better to pause now and get the settings right than to lock in koala habitat destruction for decades to come, which is what the National’s bill would have done.

“Even before the bushfires, koala’s were on track to become extinct in the wild by 2050 without urgent action. Then the fires wiped out about 30 per cent of the population in some areas.

“The government must now come up with new laws that put the survival of the species ahead of commercial interests of big agribusiness and other property developers.”