Origin’s announcement that it will close its Eraring power station in 2025 is a sign of the unstoppable momentum of change to cleaner and cheaper energy, according to the Nature Conservation Council.

“Origin’s announcement is a ray of hope for leaving a safe climate for our children," said Nature Conservation Council Chief Executive Chris Gambian.

Singlehandedly, this announcement will avoid up to 87 million tonnes of climate pollution. That is more than the annual emissions of 167 countries, including Austria, New Zealand, and Greece.

"Origin's announcement means that over the next three and a half years, NSW’s clean energy industry will boom to ensure there is sufficient clean energy generation to continue bringing down power bills.”

“There is over $100bn of investment interest in clean wind, solar and batteries in the Hunter Renewable Energy Zone alone.”

“We need the NSW and Federal governments to step up and get the batteries, solar and wind farms, and transmission lines up and running by 2025 to ensure a seamless transition.”

“NCC welcome’s Origin’s commitments to provide tailored transition support to its workers, and to invest in new battery and pumped-hydro plants in NSW to provide clean energy on demand.

Eraring Power Station, situated on the shores of NSW’s Lake Macquarie is the largest coal-fired power station in Australia.

Government fails to rule out burning native forest for electricity

The Nature Conservation Council is deeply disappointed that the NSW Government hasn't done more to plug loopholes and shut down attempts to marketise our native forests in its response to the Sustainability of energy supply and resources in NSW inquiry.

Jacqui Mumford, Deputy Chief Executive of NCC: “The NSW Government has missed an opportunity to provide additional protections to our increasingly vulnerable native forests, and the wildlife they support.

“Burning trees for electricity is backwards; it destroys habitat for NSW’s iconic species and is dirty, costly and unnecessary.

“When the government says that only native forest residues are allowed to be woodchipped and burnt to generate electricity, they don't say that this can include entire trees.i

“Proposed projects such as the Verdant Biomass Power Station in Singleton, if approved, will create a market for bulldozing smaller and wonky trees that should be left standing in the forest to provide critical habitat to koalas and other species.”

The Verdant Biomass Power Station in Singleton could burn 850,000 tonnes of biomass per year, sourced within 300km of the Singleton. It could see a massive increase in native forest logging on the north coast of NSW, if the Perrottet government neglects to amend the definition of wood residues.

“This report comes only a week after the koala was uplisted to endangered, and was a real opportunity to take a step in the right direction.

“This Inquiry made it clear that the Protection of the Environment Operations (General) Regulation 2009 must be amended to close loopholes that allow native forests to be woodchipped and burnt for electricity. The Government has ignored the advice of experts.”

The NSW Government’s almost $500 million package to accelerate the uptake of electric vehicles [1] is the beginning of the end of the internal combustion engine’s 120-year monopoly on road transportation in NSW. [2]

“This is an historic and very welcome package from a government that has significantly increased its commitment to climate action over the past few years,” Nature Conservation Council Chief Executive Chris Gambian said.

“It will not only reduce the climate impact of road transportation, it will reduce the health impact that cars have on people by improving air quality across our congested cities.

“I commend the Premier and all the ministers who have made this possible, including Treasurer Dominic Perrottet, Transport Minister Andrew Constance, Deputy Premier and Regional NSW Minister John Barilaro, and Environment Minister Matt Kean.”

“Making the state’s vehicle fleet run on 100% clean energy is the next big challenge after transitioning the electricity grid in NSW,” Mr Gambian said.

“We still have a long way to go to clean up the grid, but the government has shown today that it understands the urgent need to also tackle the transport sector.

“About 22 per cent of the state’s greenhouse gas emissions are from the vehicles, so electrification of transport is a key to tackling climate change. [3]

“The government’s electric vehicle package signals the beginning of the end of the internal combustion engine as the dominant mode of road transport in this state and the dawn of a new, clean energy era.”

Earlier this month the Nature Conservation Council launched its campaign to convert the state’s fleet to electric vehicles. The council’s Accelerate NSW campaign includes policies to:

“We are very pleased that the government has acted on most the of priorities we have identified,” Mr Gambian said. 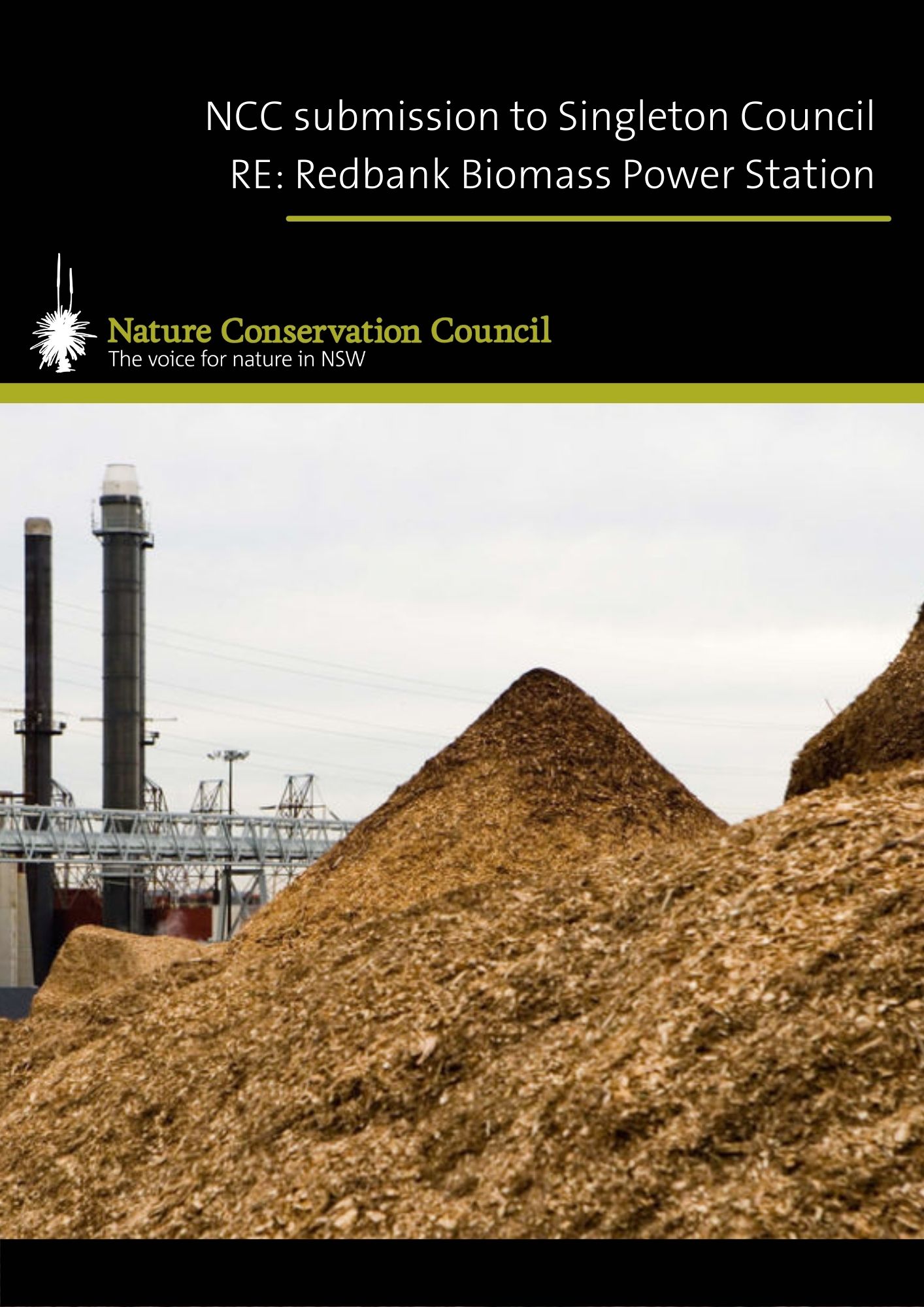 New National Pollutant Inventory data show toxic air emissions from the state’s coal-fired power stations fell 15% in the year to June 2020, but they are still among the most polluting industrial facilities in NSW. [1]

During the 2020 financial year, coal-fired power stations at Lithgow, on the Central Coast and in the Hunter Valley spewed out more than 268,000 tonnes of toxic air pollution including:

“All these pollutants have a huge impact on people’s health so these facilities must clean up their operations and shut as soon as possible.

“The 15% reduction in emissions is very welcome, these facilities are still a major source of dangerous airborne toxins, including oxides of nitrogen and sulphur and fine particles, which all cause serious respiratory and cardiovascular diseases.

“The total health impact of this industry on families is colossal, especially in the Hunter, on the Central Coast and across western Sydney where many of these emissions end up.”

Climate pollution from NSW coal power stations fell by 4.1 million tonnes of CO2 in the reporting period, equivalent to replacing 1.3 million petrol cars with electric vehicles, about a third of the NSW passenger vehicle fleet.

Angus Place Colliery near Lithgow may soon be a worthless stranded asset because its main customer, Mt Piper power station, could be broke by 2025, new economic analysis shows.

The Institute for Energy Economics and Financial Analysis (IEEFA) has released a report today that shows Mt Piper power station, owned by Energy Australia, losing $50 million a year by 2025.

The analysis echoes comments made by Australian Energy Security Board Chairperson Kerry Schott last week, who said coal-fired power stations “will probably go four or five years earlier [than their scheduled closure date] because they are not making any money and they may go before that”. [2]

“If that happens, the Angus Place Colliery expansion will be a white elephant — a stranded asset and a toxic legacy.”

“The NSW Government should reject the Angus Place application because the economic argument, which was always flimsy, is getting weaker every time there is a new report,” Mr Gambian said.

“The expansion plans don’t stack up, not in terms of the ecology, the economics or the climate.

“This mine expansion would cause a local ecological catastrophe by draining and killing rare wetlands, and for what? It seems unlikely to even keep Mt Piper going.

“There are huge opportunities beyond coal for communities like Lithgow, but they will require investment by the government and business.

“Lithgow can’t reach its post-coal potential alone - it needs substantial support from the state and federal governments. That support is conspicuously lacking.

“Change in our energy systems is gathering pace so coal communities need government help to get on board or they will be left behind.

“We need something similar to ensure our communities don’t suffer because of the rapid international shift away from coal.

“We call on the NSW government to set aside a substantial fund, with billions of dollars to ensure no worker is left high and dry and that coal mining regions will have sufficient resources to adapt economically.”

Only one power station in the Hunter/Central Coast region to be profitable by 2025?

Two of the three coal-fired power stations likely to be still running the Hunter and Central Coast regions by 2025 could be worthless stranded assets, new economic analysis shows.

The Institute for Energy Economics and Financial Analysis (IEEFA) has released a report today that shows Eraring and Vales Point B power stations will be running multi-million dollar annual losses by 2025. [1]

The analysis echoes comments last week by Australian Energy Security Board Chairperson Kerry Schott who said coal-fired power stations “will probably go four or five years earlier [than their scheduled closure date] because they are not making any money and they may go before that”. [2]

Nature Conservation Council Chief Executive Chris Gambian said: “The people of the Hunter region are being let down by political leaders who have failed to prepare for the inevitable changes facing their community.

“There are huge opportunities beyond coal for the Hunter community, but they will require investment by the government and business.

“The Hunter region can’t reach its post-coal potential alone — it needs substantial support from the state and federal governments. That support is conspicuously lacking.

“Change in our energy systems is gathering pace so coal communities need government help to get on board or they will be left behind.

“We need something similar to ensure our communities don’t suffer because of the rapid international shift away from coal.

“We call on the NSW and Federal governments to set aside a substantial fund, with billions of dollars to ensure no worker is left high and dry and to create jobs in coal regions.”

Daisy and Brad dig into Labor's commitment and what it means for the climate, electricity bills and the upcoming election.

Just weeks out from the NSW election, join us for our biggest door-knock yet, in Bronte, to ramp up the pressure on all parties to revolutionise energy in NSW! Are you in? RSVP here: http://natureorg.nationbuilder.com/doorknock_day_of_action?fbclid=IwAR0Fzh0rVy5vipxeZ6iHgOyTjSi0Q1UKx7aYnrS52js3TYmIRAfSrJosluI